During this phase, the Town Governance Study Committee shall investigate in detail the issues identified and selected during the “Identify Issues” phase. The initial intent was that the committee would catalog and collate the points captured during the previous phase, organize them into categories, and address the categories in priority order. At the meetings of the TGSC on January 11th, 2020 and then January 30th, 2020, the committee members each summarized the salient points captured during the previous phase. During this discussion, it became evident that the study of several issues might depend on the broader form of government. Thus, the committee agreed that the study should focus on form of government. Thereafter, additional issues will be studied. Accordingly, the TGSC determined that Phase 2 shall be divided into two parts:

• Part A: Study of form of government

• Part A: Study of remaining issues

The remainder of this page documents the plan that arose from this decision.

Importantly, though the committee is beginning with a study of form of government, the committee believes other issues are important and deserving of consideration.

Part A: Study of Form of Government

The study of form of government shall include which form to adopt including:

• Open Town Meeting and Select Board, with or without a professional Town Manager

• Representative Town Meeting and Select Board, with or without a professional Town Manager

• Council with Mayor, with or without a professional Town Manager

Initially, the committee shall gather and consider qualitative and quantitative data on forms of government and on Andover’s civic participation.

Part B: Study of Remaining Issues

The committee will then study the dozens of issues identified based on the Phase 1 public input. If additional issues come to light, over and above those captured during the “Identify Issues” phase of this study, the Committee shall consider whether to add these new issues to the study.

The full list of topics that was discussed in January 2020 and noted in the minutes of the January 11th 2020 meeting includes topics that have already been dispositioned or otherwise no longer require consideration, including:

• Topics relating to Form of Government, including potential reforms to Town Meeting

• Conceptual suggestions about our study approach (e.g., data analysis) because those are not topics but rather are methods.

• References to sources (e.g., Vision 2021, Select Board Vision Statement) because those aren’t topics but are instead resources.

• Most of the private warrant article topics that were originally listed to give the committee a feel of recent governance topics rather than as topics for explicit study.

The remaining topics shall be studied in in two tiers, with a month of uncommitted time as contingency for additional study. These two tiers, and the contingency, will run from April 2021 to the end of September 2021. It is important to note that assignment of topics to tier 1 or tier 2 does not imply any relative importance; the assignment is based entirely on organizing topics into groups that logically should be considered at the same time. Some topics shall be initially studied by subcommittees, some shall be studied by the entire committee with staff presentations, and some shall be initially studied by designated point-persons. Of course, the full committee will make final decisions on all topics. 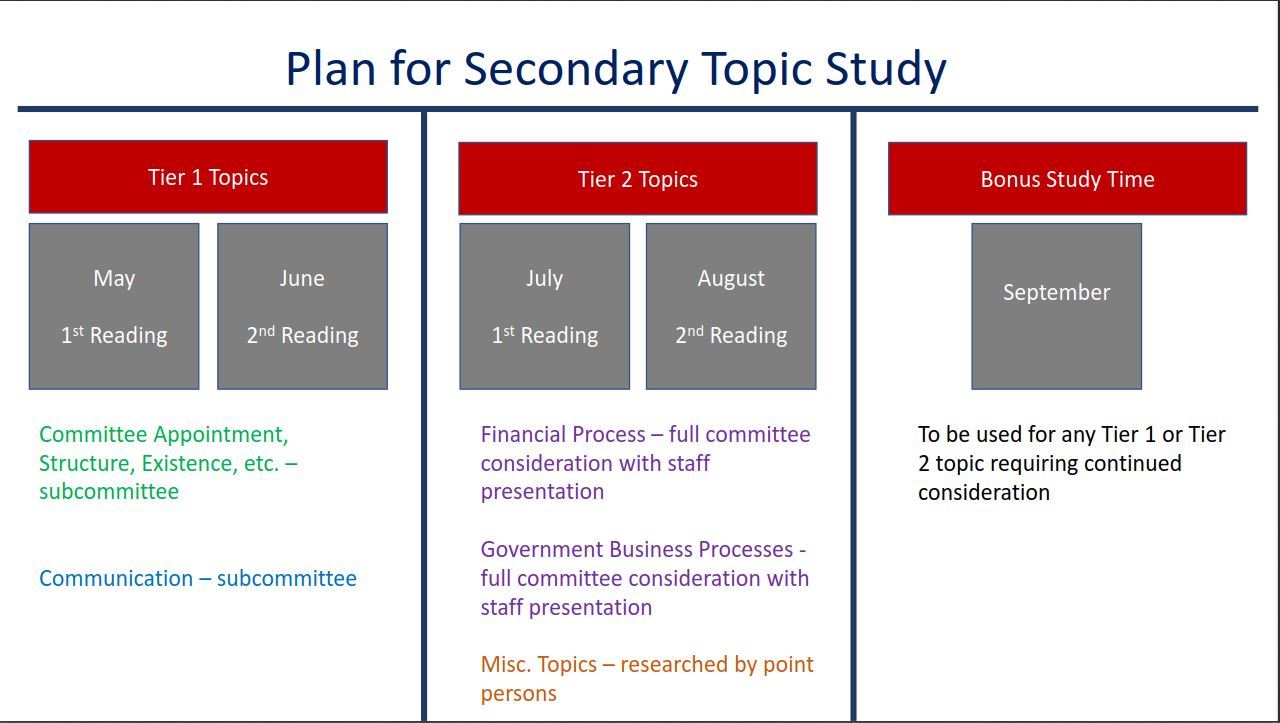